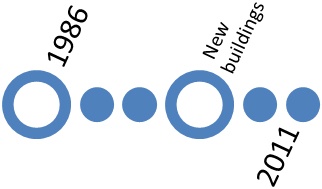 Indelac Controls Inc. (ICI) was founded in 1986 and was incorporated as an “S” corporation on November 30, 1987. Our name was derived from the products we manufacture: INDustrial ELectric ACtuators and CONTROLS.

ICI’s mission is to manufacture a high quality electric actuator at a reasonable cost in a timely manner.

Electric actuators are electro mechanical machines that are used in the valve and damper industry for automation purposes. Our actuators are used to automate valves and dampers ranging in size from 3/8” up to 30”. Our products are used in applications controlling all types of fluids.

1987 – Started designing electric actuator product line, which was to have a range of 100 lb-in torque up to 30000 lb-in. Introduced first electric actuator, which was a 200 lb-in unidirectional, two position electric actuator. We decided to offer this actuator first because we had a customer interested in purchasing a large number of them. The sequence in which the actuators were developed was primarily due to customer demands and requirements. Some light machining was performed in Robinson’s basement but the majority of the machining was done by outside sources and shipped complete.

1992 – Added LH (5000 lb-in torque) to L series and introduced model E7.5K-17 that developed 7500 lb-in output torque. Introduced electric spring return actuator product line, which had seven models covering a torque range of 100 lb-in to 1500 lb-in. We had some problems with that product in its early stages due to not enough testing at our plant and misapplication. The product line has been reduced to four models covering a torque range from 200 lb-in to 1000 lb-in and may not be used in control applications. After restricting the use of the product for fail-safe applications we had since experienced excellent success. Purchased CNC milling machine and multi-spindle drill press which allowed ICI to play a larger role in parts machining process.

1997 – Reduced torque rating on model LH from 4800 lb-in to 3840 lb-in, replaced model HDG with model 27K, introduced 5K with 5000 lb-in torque to fill the gap left after down sizing model LH. Discontinued models AS10 & AS20 but later reinstated model AS10 due to customer demand.

2018 – Launch of our newly designed website! Our goal is to create a smooth and efficient browsing experience for our trusted and valued customers and business partners. We hope you enjoy our new uncluttered design that is easy to navigate, and more user-friendly.

or Talk to Us