Can 3D Printers Change the Face of the Manufacturing Industry

Not that long ago, the only way a manufacturer could build a prototype was to spend a whole lot of money in R&D and then even more into castings or moldings. Now, however, building a prototype can be as inexpensive and simple as hitting the “print” icon on your computer. For those of you who have been hiding in a cave for the last decade or if you are not aware of the process, 3D printing, also called additive manufacturing, is a process of creating a 3D object of possibly any shape from a computer-generated digital drawing.

Until recently, 3D printers were massive and astronomically expensive, but, as for many technological innovations, such as the computer chip, the 3D printing technology has also matured and is now accessible to anyone with as little as $300 (for entry models).

A 3D printer can be used to create anything from custom ornaments, music instruments, everyday objects around the house, and even a working gun! So, in comparison, making real engineering prototypes shouldn’t be too difficult. Indeed, much like a regular paper printer, the 3D printer attaches to a computer, through which users download or create models using any 3D drawing software. Once that step is completed, just hit print and depending on the size of your creation, few minutes to several hours later, you should have your prototype.

For manufacturers, 3D printers seem to offer endless opportunities. Especially within the valve and automation industry, while prototypes of seals, gaskets, cams, gears or any parts you can think of are certainly possible, would it eventually be possible to use 3D printing technology to fully make an actuator?

And what about plants and process lines? Could a whole factory be designed with this technology? Surely miniature models of a plant and its machines could be made, allowing designers to arrange the equipment just like furniture in a dollhouse.

3D printing certainly changes the face of modern manufacturing. Here at Indelac, there is currently a need for special locking cams. We are going to use a 3D printer for the first time to produce a working prototype and all that in less than a week!

So manufacturers, brace yourselves, exciting times ahead! 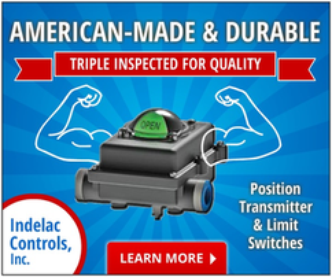