The ethanol blending process is a critical part of a gasoline terminal operation and has a significant impact on product quality, meeting environmental regulations and profitability. Optimizing the process is very important, but does present some control challenges. For example, thermal expansion of gasoline and ethanol do not occur at the same rate, and the blended mixture has to be isolated from water due ethanol’s miscibility in water. For these reasons, many terminals blend in real-time while loading directly into the tanker trucks, but, the required control strategy doesn't allow much room for problems or inconsistencies. Getting the needed control begins with accurate, consistent and reliable valve actuation.

Many large petroleum-based in the US identify ethanol/gasoline blend valve actuators as a key to improving the blending process. Conventional electric rotary valve actuators can be used on the ethanol blend valves. However, evaluation proved that a responsive actuator is needed. With low quality actuator, the process will not respond fast enough eventually causing process dead time and overshoot, which can lead to poor control, cycling and variability. The net result is the inability to closely control the ethanol concentration in the mixture and the risk of producing an out-of specification blend in the truck.

Poor control is always costly, but producing an out-of specification blend is extremely costly. When a bad blend is created, the entire truckload must be dumped out and reprocessed. In an effort to avoid these costly problems, choosing a high quality responsive electric valve actuator is the key. With the right actuator, installed and fine-tuned correctly it becomes easy to get the proper ethanol concentration in the mixture. 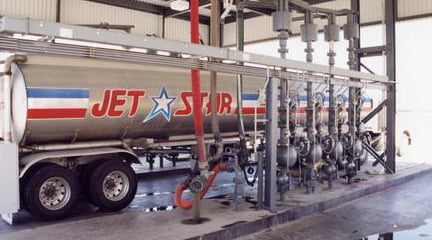