Could Electric Actuators have prevented the Great Flood of Paris?

Since the middle of the 20th century, to regulate the level and the flow of water of a river, many cities use sluice, knife or slide gates. They can be essential in protecting against flooding in times of non-discontinuing precipitations but also in times of drought by regulating the flow and keeping it at a minimum level. In 1910, if the Seine, river crossing “The City of Lights”, was equipped with sluice gates automated with electric actuators, could the city have prevented The Great Flood?

1910 – Paris, France. At the time, there was no technology in place to modulate the flow the Seine; all that was available to control the level of the water was the Zouave statue under the Alma Bridge. For Parisians, this statue has always been used as a measuring instrument for water levels in times of flooding on the Seine. Access to the footpaths along the river embankments is generally closed when the Seine's level hits the feet of the Zouave, and when the water reaches the statue's thighs, the river becomes non-navigable. During the Great Flood of the Seine in 1910, the statue had its shoulders underwater.

Could automated sluice gates placed upstream of Paris have really stopped this historical flood? No. This catastrophe could probably have not been avoid just with the use of this technology.

In late January 1910, following months of high rainfall, the Seine River flooded the French capital when water pushed upwards from overflowing sewers and metro (subway) tunnels, and leaked into basements through fully soaked soil. Besides, the waters did not overflow the river's banks within the city, but flooded Paris through tunnels, sewers, and drains. Winter floods were a normal occurrence in Paris, but on January 21, the river began to rise more rapidly than normal. 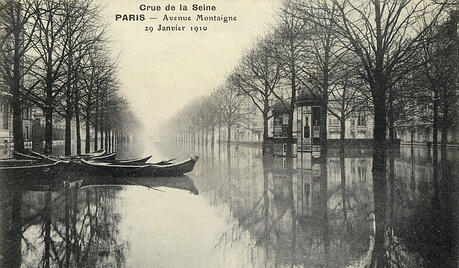 Over the course of the following week, thousands of Parisians evacuated their homes as water infiltrated buildings and streets throughout the city shutting down much of Paris' basic infrastructure. Police, firefighters, and soldiers moved through waterlogged streets in boats to rescue stranded residents from second story windows and to distribute aid. Refugees gathered in makeshift shelters in churches, schools, and government buildings. Although the water threatened to overflow the tops of the quay walls that line the river, workmen were able to keep the Seine back with hastily built levees. Once water invaded the Gare d'Orsay rail terminal, its tracks soon sat under several feet of water. To continue moving throughout the city, residents traveled by boat or across a series of wooden walkways built by government engineers and by Parisians themselves. On January 28, the water reached its maximum height at 8.62 meters (28.28 feet), some 20 feet above its normal level.

Traditionally, the sluice gates were operated manually, requiring and lot of strength, most of the time several men to operate it and it also was time consuming. Moreover, the process was risky for the work force: trapping and falling happened. Even if, the gates were in place in 1910, it would have taken too much time to operate of all them in the different cities upstream of Paris. Furthermore, the higher the level of the river, the stronger its flow and the more manpower necessary to operate the sluice gate. 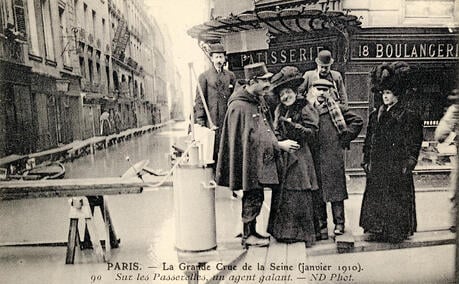 So even modern technology would have not saved this beautiful city. At most, it could have limited damages caused to some areas.

Nowadays, automating these gates with electric actuators is vital for both the safety of operators and flooding prevention. The effort required to operate the gates is naturally reduced to almost nothing, because the push of a button or a switch will move the gate to the desired position.

Finally, an even more efficient way to manage the level and the flow of a river is to add sensors to the installation. For instance, whenever the river reaches pre-define level, sensors could automatically send a signal to the electric actuator that would operate to open or close the sluice gate. The process would be fully automatic. Human presence would only be required for periodic maintenances.

Want to know how it works?